A data scientist might use a huge number of systems.

Some people are overwhelmed by how many there are. There’s too many to think about, so they cope by not going deeper than necessary. They treat each system as a black box, with inputs and outputs. They abstract away the complexity.

You might know how a system works, broadly. As long as it keeps working, you don’t care about the finer details. Well-made software doesn’t normally break. Trust it. It’s black-box thinking. It might have served you well so far.

But has it? You got the job done. But you missed the chance to go deeper.

Here’s a hypothesis. Say you have two data scientists with equal experience, but one’s better than the other. There’s a good chance the better one has spent more time taking apart systems.

There’s real value in discovering how a system works. It’s a fantastic way to build skills. And if your end goal is to understand the system, there’s no better way to do that.

What’s in a lawnmower? 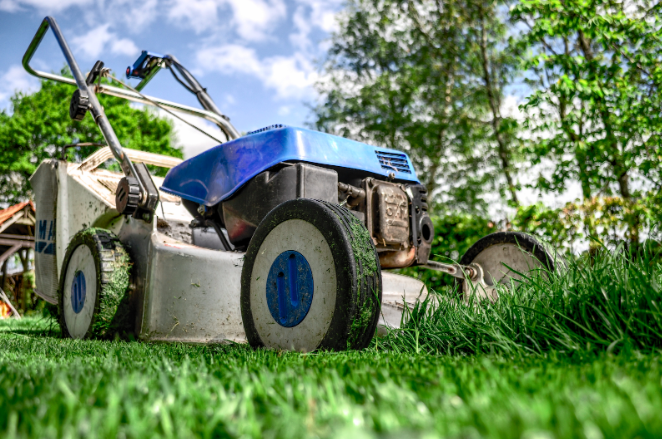 How do you take apart a system? It’s like taking apart a lawnmower.

Step one is to find out what the lawnmower does. You’re looking to get a high-level understanding to get some helpful context. You know a lawnmower cuts grass. It sounds trivial. But knowing that gives you direction. If you didn’t know what a lawnmower did, everything inside the mower would make less sense.

Step two is to go to the first layer. That’s the outside of the mower. Look at the different parts and what they might do. There’s a cord to turn it on and some wheels to help it move. Blades cut the grass and a large plastic section catches the trimmings. How do the blades move? You’re not sure. An engine, probably. There’s a petrol tank – looks like it needs petrol to run.

The point here is to grasp how the mower functions. You’re also trying to find anything you didn’t already know. Context really helps when looking into a system.

Layer 2 now. Take off the cover. You’re looking inside the mower and it’s confusing. You can make some sense of it by separating the internals into chunks. One chunk might provide petrol to the engine. Another chunk makes the blades move.

Now you have a little structure to the mower, but it’s still confusing. Time to get to work. Pick something. It’s a strange bit of metal. You google it. Looks like it’s something called a spark plug. It should connect to the engine. You look and confirm. Didn’t your friend need one once?

Had enough yet? You can stop here if you like. Or you could break up another chunk, then another, until you know everything about the system. Do this enough, and you can create the lawnmower from the parts itself. You’d know how it really worked.

This is a data science blog, so let’s look at a software example.

I was going through a Jupyter notebook and came across a gains chart: 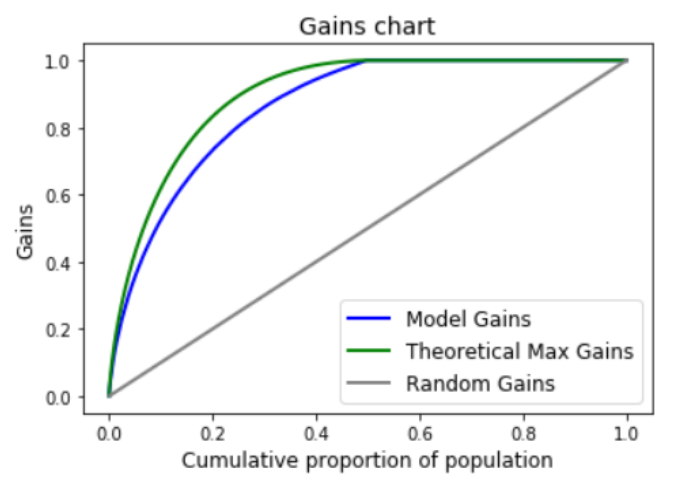 I didn’t know how to interpret it, how it worked, or why it took so long to make. The chart was a black box.

Okay. Start with step 1. What’s the chart saying? Google around a bit. Read some articles. Looks like the chart shows how good a model is for a categorical predictor, or a classifier model. Wait - not model performance, but model confidence.

How does it do this? A classifier gives each row in your dataset a prediction and a confidence rating. It’s saying: here’s what I think, and here’s how confident I am in this prediction. So if you order the confidence values from high to low, your predictions should start off mostly correct and get worse. But how much worse do they get? What happens if you use your most confident observations and ignore the rest? The chart has the answers.

Okay. But my notebook doesn’t have categorical data. I’m not predicting a category, but something continuous. number. Regression, not classification. The problem is that a regression model doesn’t tell you a confidence rating. It gives you a prediction and that’s it. How does the chart work without confidence ratings? What do I order by? Google didn’t have this.

Next step. Time to dive into the source code. I’ll get answers this way.

I decide I’ll use Excel to organise my thoughts. Many people don’t like Excel. There’s an unfair stigma against Excel in data science. I can see where it comes from. If it’s used as the tool for every task, the results will often be terrible. But for the right use cases, Excel is a great tool. It’s very visual and easy to use. It’s fantastic for exploring simple problems.

So I create an Excel workbook and make up some sample data. I translate the code into the workbook, line by line, building a diagram to represent the code flow. Here’s my diagram at the end: 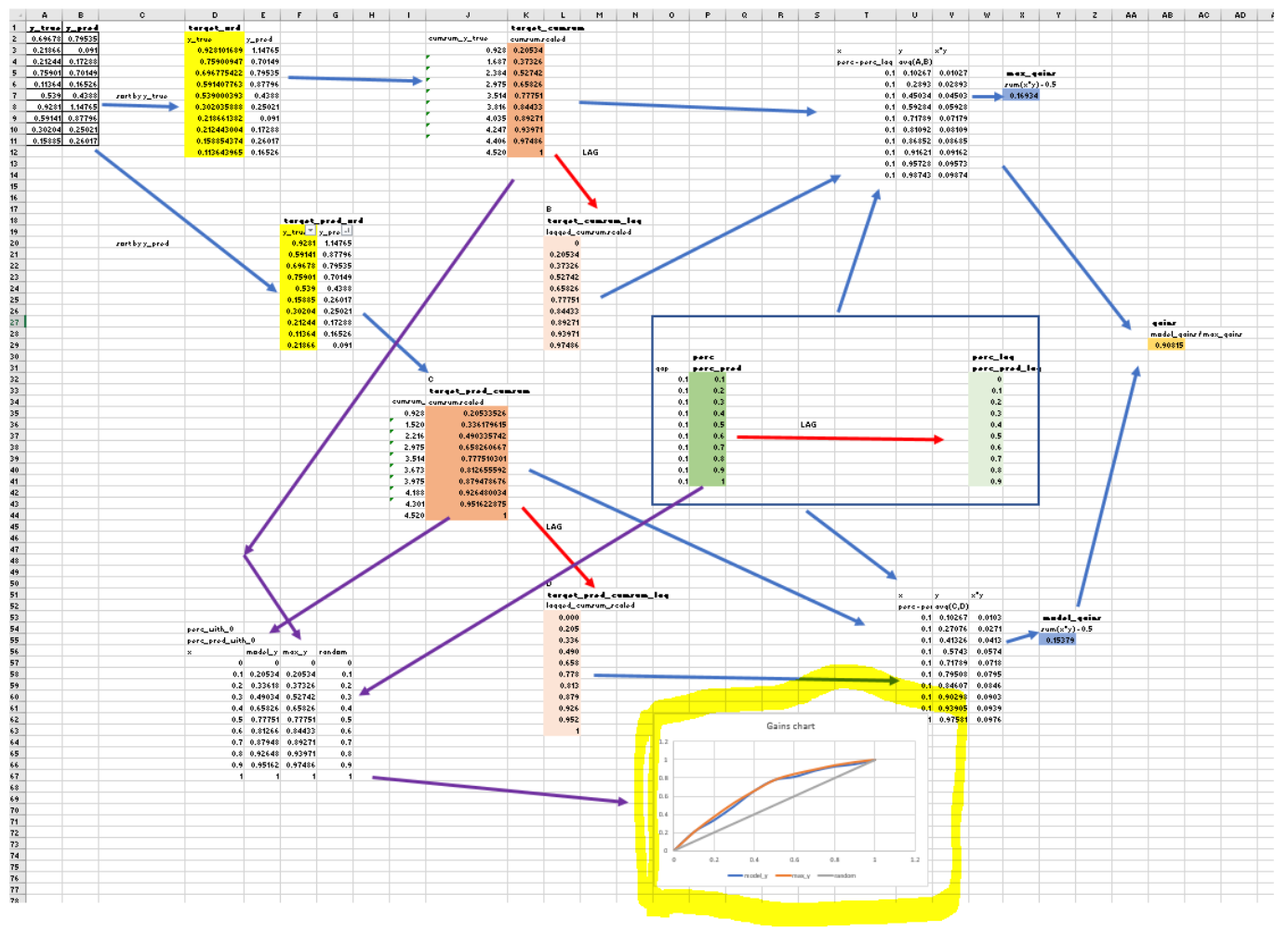 It was clear that the code was overly complicated. I simplified it and made another diagram. It was much more clear:

I played with the chart now, changing values and watching the chart update. I found some insights this way. They seemed obvious after I knew them, but I’d have missed them without doing this 1. I could see now how the chart worked, and wrote my changes into the code to make it simpler and quicker 2.

I find taking apart a system gives transferable knowledge. You’re forced to understand things deeply. You’re not memorising anything. It’s not rote learning. You’re solidifying fundamentals you can apply across many situations. If you learn by rote you’ll struggle to extend the concepts. It’s fragile knowledge - where you think you know something better than you do. Fragile knowledge can lead to overconfidence.

Why don’t we all do this?

Taking apart a system isn’t quick. The gains chart was relatively simple, but many systems aren’t. Some are large, others complex. It’s easy to tell yourself you don’t have time. It might even be true!

It’s human nature to avoid long, difficult tasks. It’s no wonder we avoid starting. We have to flip things around. Make it quick, not long. Make it easy, not hard.

If the lawnmower engine is too complicated to understand, start with the fuel system. If that’s too complicated, go smaller. Keep going until you have something that feels easy. Then start there.

Make it quick and easy. Just like cutting grass.

We at Verge Labs are proud to launch Oversight.ai - an ethical AI software...